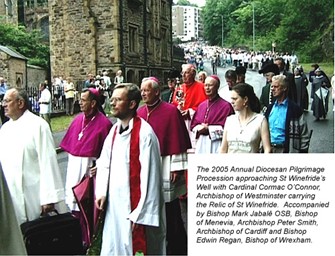 St Winefred or Gwenfrewi Sant, in her iconography is seen as Abbess of Gwytherin and known as a gentle and kind religious leader for fifteen years. She wears the Crown of redemption, her crozier and a nun’s habit, as so she is remembered in the Roman Martyrology (Sancta Wenefreda). In her statue at the shrine and above in the Guild window at Shrewsbury Abbey Church, she also carries her martyrs’ palm. It was because of the translation of her remains from her Abbey in Gwytherin to the Benedictine Abbey of Shrewsbury and the establishment of her Guild there, that her fame as a miracle worker was carried through to London, where Caxton produced the first printed copies of her Lyf or Vita.

How Winefride/Gwenfrewi was received in both places, although by the same Church was slightly different. In Wales on the night vigil before her feast day (3rd November)[1] pilgrims would gather, and very often a bard would stand before her icon or statue and address the saint with a poem. There are many medieval poems, even Eucharistic in character, but one of the most beautiful is by the bard Tudur Aled. It joins Winefride/Gwenfrewi’s blood in her Well, to the water and wine of Eucharist, emphasising the miracles as the work and power of Christ.

1 Heaven’s gift before her flesh was cold

For the innocent maidenhood.

While the Son was offering his Sacrifice

And his prayer to God in her was strength

He led a river for her in heaven.

2  And a Channel of Grace, it was a holy place.

How fit it was, when Gwen was raised

That river Jordan sprang up

There is less of a surge in Aaron’s current.

Or the Euphrates in this stream.

3What is the trace that leads forever

Is it not her blessed blood?

Christ’s drops from the arms of the cross

The health of a man’s body if it were obtained.

Drops of water and wind

The source of the clear water’s lively ripples

They are the symbol of good health-water’s bubbles.

5A fervent stream from the boiling burning wound

And is called the fount of the chrism of faith

Fervent is the dew of the Holy Spirit

The baptismal water, the fresh growth of the world

The miracles of Winifred from the First Life, ostensibly written by a monk at Basingwerk Cistercian Abbey, attest to Winifred working through the waters of her well, her closeness to Christ allowing him to answer her petitions. The miracles seem to have been gathered over a long period- ‘…..in the times of the Danes’ and ‘….in the times of the Franks…(Normans).Some of them are ‘punishment’ miracles, in cases of committing sacrilege at the Well or in the Church. Winefride manages to stir their consciences, brings most to contrition and public penance. Indeed, many other miracles describe a great range of illnesses and disabilities, not only the supernatural wonder and rejoicing, but actually describing a theological point in each case, either by regarding it as allegory, or ethically and anagogically-how does the miracle ‘lift up the faithful pilgrims to the hope of Salvation?’ It is likely some miracles were often formally read at some time around the feast day and raised the hope of those gathered there for a cure. It is important we do not view these miracle stories through the veil of the Reformation, Enlightenment or through twenty-first century prisms- or they would just be risible impossibilities. These Christians lived in an age where the saints (and demons!) walked amongst them invisibly. They had faith and trusted God and their saint. They would pray overnight by candlelight in the church for three ‘watches’ or vigils,(usually the Pader, the Credo or an early form of ‘Ave Maria,’) carried three times around the Well in the water, still praying and then kneel or sit on St Beuno’s stone in the well and venerate the cross in the wall, as a baptism of faith. Judging from the miracula collection of the First Life, there were a considerable number and range of sick persons who were cured and of the punishment miracles-those who did not repent died-especially it seemed the Normans!

When a monk of Shrewsbury Abbey was cured at the behest of the saint, the brothers decided not enough honour was paid to such a great saint as Winefride at her burial site at the saints’ graveyard at Gwytherin and Robert of Shrewsbury led a party of seven there to exhume her, as they needed saints at their abbey for pilgrims.(cf Cadfael-A Morbid case for Bones-Ellis Peters and TV episode- fictional but interesting.)

Apparently, Robert, Prior of Shrewsbury (who wrote the Vita Secunda)wrote money exchanged hands after villagers objected to having their local saint removed. Yet she was taken to Shrewsbury Abbey and a stop was made at an inn, where a miracle occurred , and another at Woolston, where her remains were washed. The monks took some of that water back with them and it was given to pilgrims to drink to great effect. The night before the translation into the Abbey was achieved, there was the spectacular wonder of a miracle for a disabled knight from Wales in the Church of St Giles, where a vigil service before the translation was held. 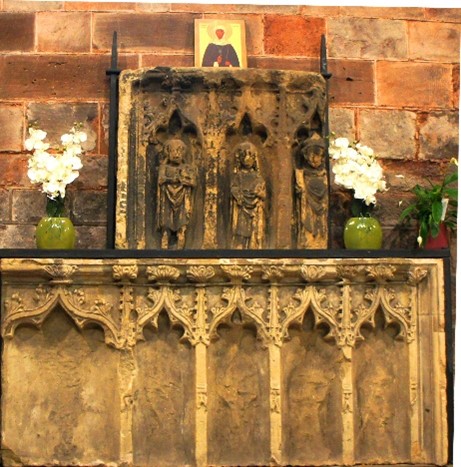 In the photo at the left, part of the old reredos in the shrine chapel, replaced in the abbey church after being found in a garden. Winefride (centre) and St Beuno (R) are shown with another saint-possibly St Andrew. (L)

There was rejoicing throughout the town, as Winefride’s procession wove its way to the Abbey, with people holding candles and venerating the remains as they passed. A Guild was formed by Abbot Mynde after permission was given by Henry VII, which has now been restored in 1987 the abbey, now an Anglican church. More miracles followed and John Mirk, a canon of Lilleshall Abbey wrote a beautiful sermon for St Winefride’s Day, incorporating three new miracles including another epilepsy account and the bite of a poisoned spider!

However, royal pilgrimages continued to Holywell by many kings of England, Richard I, (1189) Henry V (accredited his success in Agincourt to the saint and returned in 1416 to thank her.) Edward IV (1461) Henry VII, James II and Mary of Modena(1686)( apparently the priests at the well gave the king the shift worn  by his grandmother Mary, Queen of Scots to her execution). Princess Victoria came with King Leopold of Belgium (1828)and HRH the Duchess of Gloucester made a pilgrimage in 2005.

Many royal pilgrims gave money for the upkeep of the priest at the church above the shrine. (Now called St James, an Anglican Church.) I understand the Well is not yet open after the current pandemic but there are plans to do so soon (please see the website). Using the water in the well for rounding is allowed every day at certain times.

A beautiful musical conductus composition to the Saint was found last century in Worcester Cathedral, as a binding for another book. Inter choros paradisculorum is an exciting find, polyphonic and polytextual, it would have been sung on her feast day. It has a definite lilting beat and may have been a processional- at Worcester or at Shrewsbury. One text tells of Winefride, protected by God was now ‘playing’ in paradise with the other virgin martyrs. The other text tells of how God also protected Daniel from death in the burning fiery furnace.  I am working on a ‘modern’ edition. Holywell and possibly Gwytherin would have celebrated differently singing on their vigils and feast days with their customary bards, candles,  poetry and miracle accounts. Whether ‘Saint Winefride’ or ‘Gwenfrewi Sant’, her poems, lives, miracles and pilgrimages continue every year, and many more miracles are recorded at Holywell.

1Details of current pilgrimages will be available on the website soon.

2Winefride’s convent at Gwytherin Church(Victorian rebuild) has been bought and opened as a centre for the study of St Winefride and quiet place for prayer, music and other things.  It is called The Gwenfrewi Project.See FB.

3)If you wish to know details of MSS or anything above please contact me via MBIT.