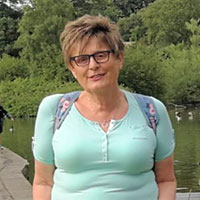 Dr Claire Jenkins is a trans woman and convert to the Catholic Church. She was married with four children until in 1999 she transitioned from male to female at 50-years-old. Prior to this Claire was a Deputy Headteacher of a secondary school. In 2013 she was awarded a PhD from the University of Sheffield for her research into the effect of transitioning on the family members of transsexual people. Subsequently she has advised a number of research projects and has spoken at Catholic and university conferences. Currently she actively involved in the pastoral care to LGBT Catholics where she coordinates a team (lay and ordained) who carry out this important work within her diocese. She also gives ongoing support to LGBT Moslem asylum seekers and refugees some of whom have become her close friends. Importantly she currently belongs to a small working party who advises the Catholic Bishops of England and Wales about transgender issues.  In May 2020 Claire was awarded a Senior Fellowship at Margaret Beaufort Institute, Cambridge where she is researching Transgender and Gender Non-Conforming (TGNC) young people’s experiences in Catholic schools.   This work has now been developed into a research project which will take place over the next few years.