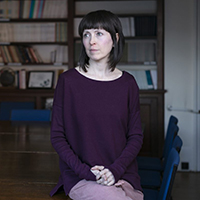 On Research Leave until 2025

For me, theology is grounded in an orientation towards the other, opening our eyes to the world around us, being struck by its significance, and inspiring others to do the same. It is only by approaching the world and each other in this way that we can develop and grow, personally, and in communion.

Dr Férdia Stone-Davis has secured a prestigious grant from the Austrian Science Fund (FWF).  Férdia will be conducting a project entitled ‘The Epistemic Power of Music: On the Idea and History of Artistic Research through Music’ in conjunction with the Institute of Music Aesthetics, and the Doctoral School for Artistic Research, both part of the University of Music and Performing Arts, Graz Austria. The project will offer a new and nuanced clarification of the kinds of knowledge music involves – not only to further the music-specific discourse in aesthetics, but also the wider theoretical discourse on artistic research. Férdia will be giving updates about the project via blog posts on her website: https://ferdiastonedavis.com .  The project will begin on 1 January 2022 and last until 31 December 2024.

During academic year 2020 2021, as part of Catholic Theology and Practice, she taught ‘Catherine Keller: Process, Relation and Entanglement’ .   She  is also co-taught the MA in Contemporary Ethics, and the core module ‘Human Condition’ (which runs across the four MAs).

Her research interests centre upon music and its relation to philosophical and theological anthropology, ethics, epistemology and world-making. This is embedded within a longstanding interest in theology and the arts, and theological language.

She was involved in a project funded by the Plater Trust with Dr Elizabeth Phillips (MBIT 2020 Fellow).  Flourishing Inside is a participatory action research project aiming to develop rich, targeted theological and ethical resources for pastoral work in prisons which is informed by and contributes to Catholic social thought.

Mentor for graduate students in Divinity at Newnham College, Cambridge

The Soundtrack of Conflict: The Role of Music in Radio Broadcasting in Wartime and in Conflict Situations (Olms, 2013).

Musical Beauty: Negotiating the Boundary between Subject and Object (Cascade, 2011).

‘The Consolation of Philosophy and the “Gentle” Remedy of Music’, in Music, Myth and Story, eds. K. Butler and S. Bassler (NY/Suffolk: Boydell and Brewer), 2019.

Giving Space to Silence. Response to panel ‘The Rest is Silence’, part of the Post-War: Commemoration, Reconstruction, Reconciliation Mellon-Sawyer Seminar Series at The Oxford Research Centre in the Humanities (2018).

‘Making an anthropological case: cognitive dualism and the acousmatic’, Philosophy: The Journal of the Royal Institute of Philosophy 90(352): 263–76 (Cambridge: Cambridge University Press, 2015).

‘Music and Liminal Ethics: Facilitating a ‘Soulful Reality’’, in The Resounding Soul: Reflections on the Metaphysics and Vivacity of the Human Person, eds. E.A. Lee and S. Kimbriel (Eugene, OR: Veritas, Wipf and Stock, 2015).