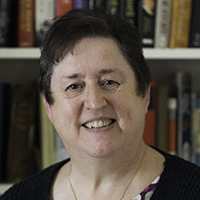 Gemma Simmonds is a sister of the Congregation of Jesus. An honorary fellow of Durham University and past president of the Catholic Theological Association of Great Britain, she has studied at the universities of Paris, London, Rio de Janeiro and Cambridge, where she undertook a doctorate in theology.

After a career in secondary teaching Gemma worked as chaplain in the Universities of Cambridge and London. Returning from study and missionary work among women and street children in Brazil in 1992, she was a volunteer chaplain in Europe’s largest women’s prison, HMP Holloway, until its closure in 2016. From 2005-2018 she was a senior lecturer in Pastoral Theology at Heythrop College, University of London, teaching and researching in the fields of theology of religious life, Christian spirituality, ecclesiology and Catholic education.  Gemma is also a simultaneous translator and interpreter in four languages and a regular broadcaster on religious programmes for the BBC, Radio Maria England & other media.

In 2018 Gemma joined the Margaret Beaufort Institute as director of the Religious Life Institute [RLI], founded at Heythrop College in 2007. She also teaches courses in Christian spirituality.  Her most recent book, Dancing at the Still Point: Retreat Practices for Busy Lives was published by SPCK in 2021.  The Way of Ignatius, also published by SPCK (2018) featured as the online Lent retreat for Pray As You Go  www.pray-as-you-go.org on Android and iOS apps.

In collaboration with the Centre for Catholic Studies in Durham University, Gemma has travelled the world giving courses and workshops on the theology of religious life in Europe, Australasia, Africa, North America and India. She is a trustee of the ecumenical Community of St. Anselm based at Lambeth Palace, London.  The RLI’s most recent research, funded by the Conrad N. Hilton Foundation, analyses the experience of women who have entered religious life in the UK and Ireland since 2000. This project is currently being further worked on in partnership with Profs. Mary Johnson and Patricia Wittberg and Dr. Mary Gauthier (USA) and Sister Nathalie Becquart (Vatican).

Within the RLI Gemma is currently working in partnership with the Union of International Superiors General (UISG) and the Center for the Study of Consecrated Life, Catholic Theological Union, Chicago to build up a global network of emerging academic experts on religious life for women.

A further new research project, in collaboration with Drs. Susan O’Brien, Carmen Mangion and Sue Price, is looking at the experience of religious inserted into Inner City projects in the UK.  This research has been generously funded by the Passionist Order and the Sisters of St. Joseph of Peace.

A further associated project, under the leadership of Drs. Catherine Sexton and María Calderón Muñoz, in collaboration with the Association of Consecrated Women of Eastern and Central Africa [ACWECA], explores the sustainability of religious life for women in Kenya, Malawi, Tanzania, Uganda and Zambia.

The key findings of these projects can be found at http://vd.pcn.net/en/images/pdf2016/RELIGIOUS_LIFE_VITALITY_PROJECT.pdf

‘Reflections on Mary and Mission’ in Susan Lucas ed., God’s Church in the World: the Gift of Catholic Mission, (London, Canterbury Press, 2020)